A diagrammatic illustration of the joint-venture is set out below: 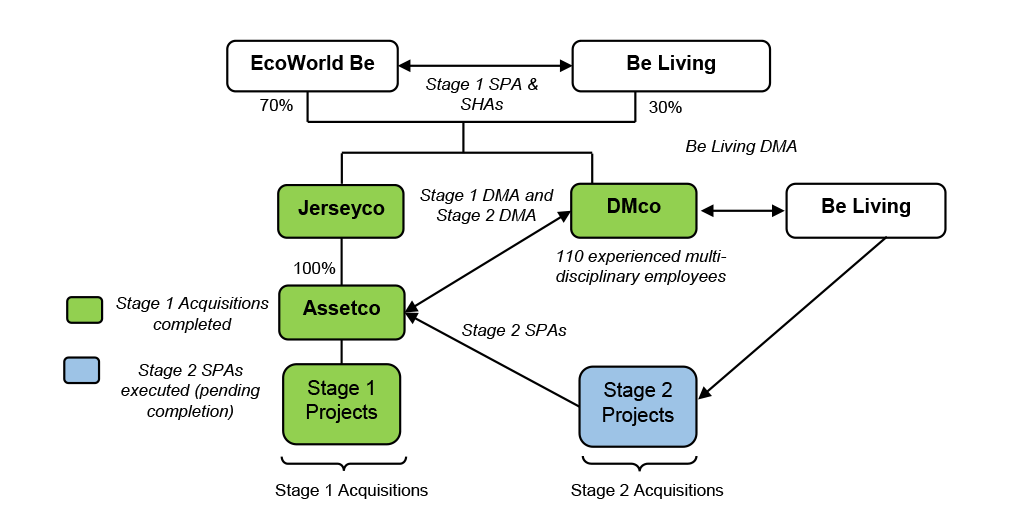 More importantly, the above joint-venture with Be Living, a sister company of prominent UK contractor & developer Willmott Dixon Holdings Limited, will open up the following markets for EcoWorld International:

This will greatly increase the breadth, depth and resilience of the Group’s UK business through the:

“The completion of the Stage 1 Acquisitions marks the start of a new era for EcoWorld International in the United Kingdom. Going forward, we are well positioned to grow our UK business strongly to meet both local and international demand in the traditional Open Market Sale (OMS) subsector as well as rising institutional demand in the Built-to-Rent (BTR) subsector,” said Dato’ Teow Leong Seng, President and CEO of EcoWorld International. The Stage 1 sites which have been acquired are as follows:

5 out of the 6 sites have secured planning consent which will enable the projects to be launched within the next 1-2 years. In addition, several projects, namely Millbrook Park, Kensal Rise and Maida Hill have launched phases which can be made available for sale within the current financial year. EcoWorld International is also planning to pursue the forward sale of one or two BTR blocks within the other projects which will further contribute towards the Group’s sales performance for FY2018.

The Stage 2 sites which are proposed to be acquired upon fulfilment of the conditions precedents of the respective SPAs are:

The Group targets to complete the Kew Bridge and Aberfeldy Village sites within the current financial year whilst the remaining sites are proposed to be completed subject to satisfactory planning consents meeting pre-agreed minimum criteria being obtained from the respective local councils. This conditional and progressive method of completion will enable EcoWorld International to better manage its cashflow and mitigate its development risks.

All 12 sites are located within the London commuter belt in areas where the local population live and commute to the capital for work. The sites are also situated close to or within a 10-20 minute walk to tube or rail stations offering a 30-40 minute commute to Central London and providing easy access to International Airports.

Commenting on the Group’s prospects Teow highlighted that local demand in the mid-mainstream market currently exceeds supply. In addition, domestic buyers of projects within the price range contemplated above are entitled to benefit from various government homeownership initiatives such as the Help-to-Buy scheme and stamp duty reliefs. This will further boost the already strong demand in this segment of the market and further insulate the affordable sector from the vagaries of global sentiment and Brexit concerns.

With regard to the BTR subsector, CBRE, in its 2018 UK Real Estate Market Outlook opined that it has grown strongly thus attracting significant investment recently and that the positive trend is expected to continue. This is due to the rapid increase in the size of the private rental sector, which has more than doubled in the last decade due to affordability constraints, coupled with less quantifiable factors including lifestyle shifts.

All this also bodes well for the joint-venture and EcoWorld International’s growth prospects in the years ahead. With this new joint-venture in place, the Group will be able to offer homes priced from £500 psf to £800 psf to cater to the needs of the local market as well as meet international demand via its existing projects in prime Central London. The substantial increase in its development pipeline by circa 8,200 units (total of Stage 1 & Stage 2 sites) will also extend its earnings visibility well beyond 2021.

On the funding front, the Stage 1 Acquisitions were completed using proceeds raised from the EcoWorld International’s initial public offering (IPO) in April 2017. With regard to the Stage 2 Acquisitions, the Group’s share of the estimated purchase consideration of GBP40.36 million (approximately RM220.57 million) is expected to be funded by bank borrowings, other debt instruments and/or internally-generated funds. This is in view of its low gearing level of only 0.05 times as at 31 October 2017 after taking into account the RM2.5 billion raised from the IPO.

Please refer to the detailed announcement for further details of the proposed acquisition and joint-venture.

Willmott Dixon is a privately-owned contracting, development and interior fit-out group, which was ranked the 42nd largest private company in the UK by the 2017 Sunday Times Top Track list. Group Chief Executive Rick Willmott is the fifth generation to lead the business, which was founded in 1852 and now generates over £1bn a year in sales.

The company is behind important projects like a new home for the Met Office supercomputer in Exeter, restoring the famous Old Admiralty Building as the new home for the Department of Education, plus bringing back to life the east wing of the iconic Alexandra Palace.

Be Living was created by Willmott Dixon as its residential development company and has a strong track-record for developing significant regeneration schemes in London and the South East, using its build to rent capabilities alongside its ability to create homes for sale and affordable rent.

EcoWorld International is a public company listed on the Main Market of Bursa Malaysia Securities Berhad on 3 April 2017. Its core business involves property development outside Malaysia. It has five ongoing projects in the United Kingdom and Australia with a total gross development value of RM13.97 billion. Major shareholders in EcoWorld International are Eco World Development Group Berhad – a well-known Malaysian property developer and GuocoLand Limited – a public company listed on the Singapore Exchange.

In the United Kingdom, EcoWorld International through its joint-venture company, EcoWorld-Ballymore is developing three waterside residential projects in the east and west of London. They are Embassy Gardens in Nine Elms, London City Island in Leamouth Peninsula and Wardian London in Canary Wharf.

EcoWorld International is also developing a project named West Village in Parramatta, Australia – a suburb and major business district in the metropolitan area of Sydney and has recently entered the Melbourne market with the Yarra One development in South Yarra.